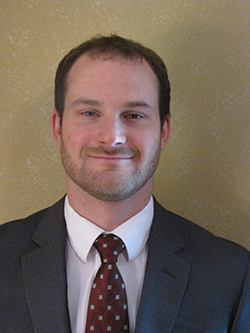 ​Dr. Mark Fuerst is a life-long resident of Van Wert, OH, but was born in Columbus and moved at an early age.   He graduated from Van Wert High School in 2003. Prior to attending chiropractic school, Dr. Fuerst attended The University of Dayton.  While pursuing his Bachelor of Science Degree in Pre-Medicine, Dr. Fuerst was fortunate enough to be a member of The University of Dayton's football team.  After graduating Dayton, He went on to study Chiropractic Medicine at The National University of Health Sciences in Lombard, IL; in which he earned his Doctorate of Chiropractic Degree in April of 2011.

Dr. Fuerst has been practicing since 2012, when he started as an associate at The Orthopaedics and Sports Medicine of Ohio in Cleveland, Ohio. After completing one year in practice, Dr. Fuerst decided to return home and become an associate with Foster Family Chiropractic.  Due to his athletic background, Dr. Fuerst enjoys the functional medicine/sports rehabilitation aspect of chiropractic, but enjoys treating all aspects of chiropractic and is excited to be back in his hometown.

Dr. Fuerst is married to his lovely wife Kristi and they have one child, Lily, who joined their family in 2019.